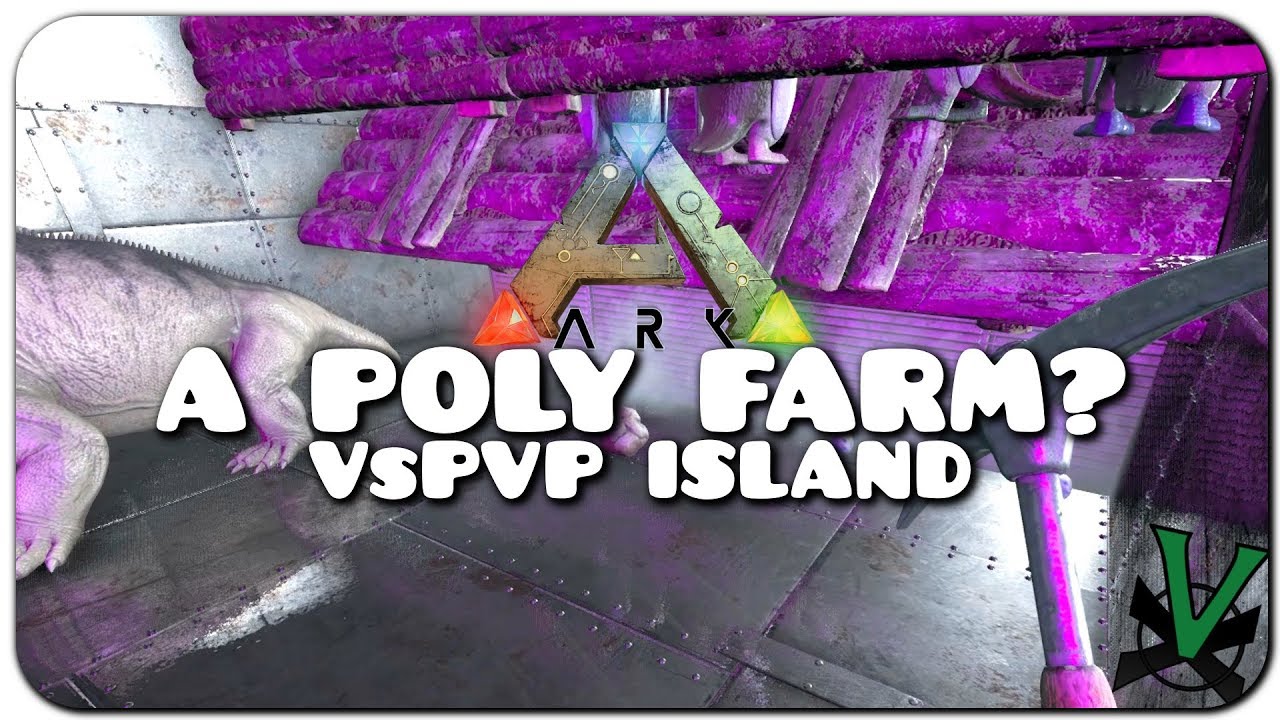 Thought I’d have a crack at setting up a polymer farm, that went well! Just another day in ARK.

SEASON 6 “VsPVP: Island” is HERE!
COME GET STUCK IN! Join the Steam group and get ready.

If you want to join or for more info hit this link to get in the Steam Group!

And if you haven’t already, support the VsPVP channels:

All in all just get stuck in!

ARK in a nutshell:
As a man or woman stranded, naked, freezing, and starving on the unforgiving shores of a mysterious island called “ARK”, use your skill and cunning to kill or tame and ride the plethora of leviathan dinosaurs and other primeval creatures roaming the land. Hunt, harvest resources, craft items, grow crops, research technologies, and build shelters to withstand the elements and store valuables, all while teaming up with (or preying upon) hundreds of other players to survive, dominate… and escape!
Tame, Train, and Ride Dinosaurs in a living ecosystem!
Dinosaurs and Creatures: There are over 100+ different creatures planned for final release, the vast majority of which can be tamed (and in most cases, ridden) through an innovative and challenging Capture & Affinity process. After taming, pets will gradually level-up through their own individual experience points, consume food, defecate, and breed. Each tamed creature has its own inventory, which can be accessed and managed by its owner and even the owner’s tribemates (depending on tribe settings). Level up your pets’ stats to allow them to move faster, carry more, hit harder, etc. Some unwilling prey can be carried back to your settlement, depending on both creatures’ strength and type. Fly a Pteranodon over the snow-capped mountains, carry allies over enemy walls, race through the jungle with a pack of Raptors, stomp through an enemy base aboard a gigantic Brontosaurus, or chase down prey on the back of a raging Tyrannosaurus! Take part in a dynamic ecosystem life-cycle with realistic/challenging survival aspects and its own predator and prey hierarchies, where you are just one creature among many struggling for dominance and survival.
Available on: PC, Xbox and Ps4.

whistle stop and it will munch it after

wow im glad you did this to show us what a waste of time it would have had been if we tried this!
lol

Uhh a good idea would be to put fences after the ramps so the babys dont spawn beneath the ramp, worth a try, if this doesnt work too, then just use another animal to kill the penguins

when the moschops runs whitsle follow then passive then whistle attack

Have you tried to whistle attack my target ON the peguin itself? Idk if it has to be dead or not

It’s so stupid tamed moschops run off scared, wish WC made it so tamed ones don’t run and actually killed stuff

Dino lvls do not effect the RNG of items drops

Surely you can bola then that would be easier not sure you can tho you tried?

Pop 2 more ramps under them so he can kill them

Try using the hyaenodon they are mean little buggers

Sometimes the game just screws with you
#ArkPhysicsLol

love the vids keep up the good work, but you have to whistle attack the penguin, it will run away for a minute but eventually it will attack it

U NEED TO WHISTLE ATTACK TO THE PENGUIN

There too cold you need standing torches

You have to pump poly into it

Or u could weigh the penguins down

The moschops needs space it's too small of an area

The babies die then it harvest moschops don’t fight

Have you tried switching your Moschops off and on again?

Why bother when you live so close to the snow?